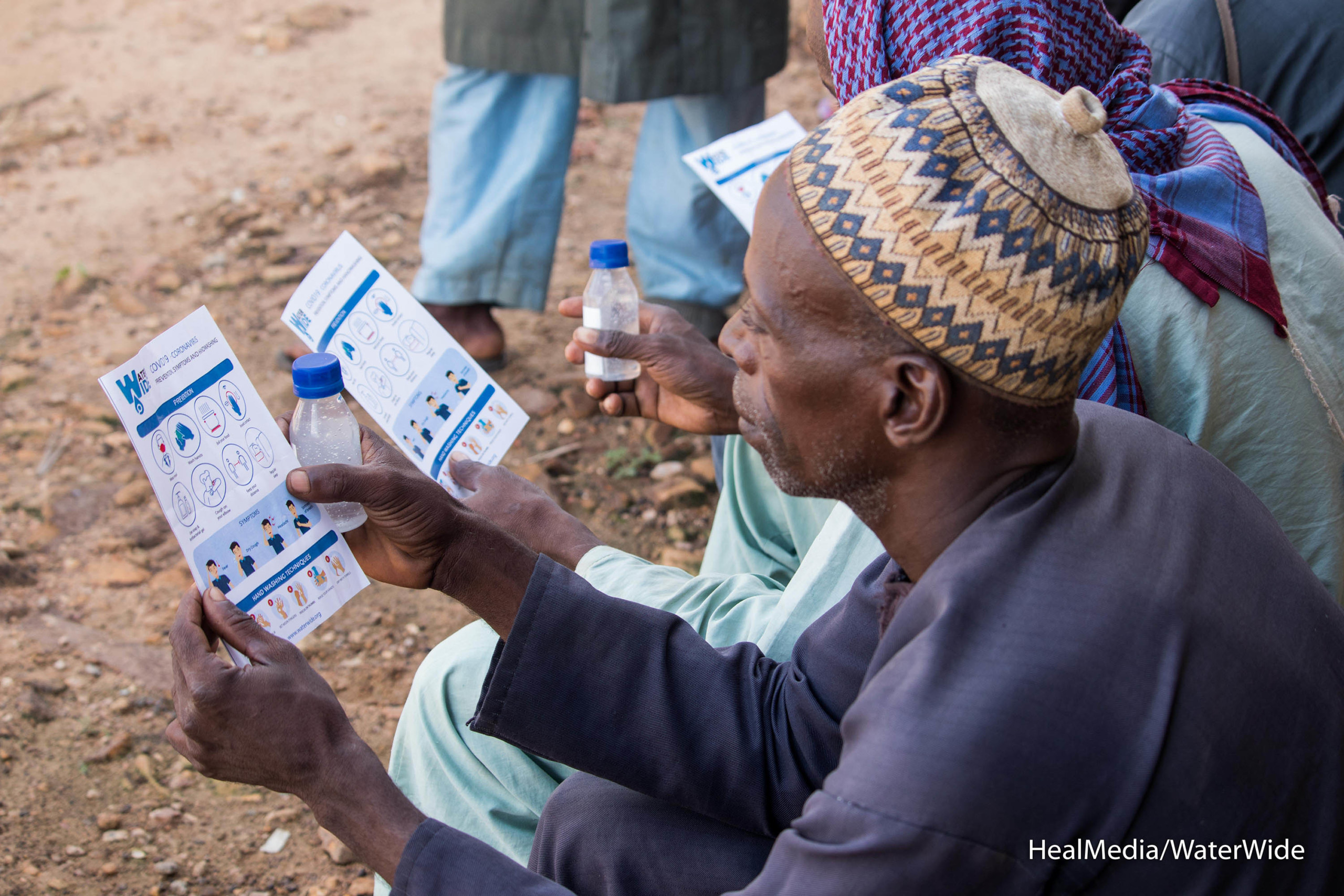 Community Sensitization: Empowering Marginalised Communities With Information on how COVID19 spreads, Source of The Virus and Local Mitigation Measures.

Kaida is like every other rural community in Nigeria characterized by a vast array of underdevelopment in possibly every sector from WASH, health, education. Kaida seems to have all it takes to blossom as a community, reaching to soar above its current status in terms of development all-round, but it can only be possible if the government prioritize their pressing needs for robust access to safe water.

Upon arriving at the community, WaterWide team was received by the community leader, He was quick to mention that the only existing borehole that served the community got bad four days ago. We told him the purpose for our second visit which was to create a platform for them to document and report WASH intervention and palliatives by the government and other stakeholders during the COVID19 period, and sensitize the community about the current pandemic and preventive measures and symptoms of Corona Virus.

A community of about 2300 individuals including women and children cannot prevail and perform efficiently and successfully if their needs for the aforementioned necessities are not put in place. In the absence of access to safe water and sanitation facilities, they are exposed to every type of water-related diseases, stunted growth, mental underdevelopment, illiteracy, economic disintegration, and social vices.

While mothers are trying to meet ends meet by selling in the mini market, babies and children under 3 are seen crawling/walking with their bare hands and feet all about the contaminated and polluted grounds of the market and at the same time taking food into their mouths. A sight not wished to behold as a memorable one.

As regards to achieving the Sustainable Development Goals 6 (SDG6) by 2030, Kaida is nowhere close to the path that leads to that destination.

Kaida community is located some 15 kilometers away from Gwagwalada metropolis. From the major tarred road into the community takes about 7 kilometer to drive in using a car on its terrible and countless undulated road. The people are mostly agrarians and few of them engage in the motorbike transport business.

There is a poorly built primary health care with no access to water on the facility suffers from every qualification to be considered one as required by the World Health Organization. The LEA primary school seem to be a long time standing dilapidated structure which lacks access to water due to the fact that the borehole built some years back has been nonfunctional for a very long time. This, of course, would tell that open defecation is prevalent.

WaterWide took a trip to Kaida community to sensitize the people as regards to hygiene and to train them on the basic handwashing technique. This outreach is propelled by the increasing death toll and infection rate by the Coronavirus pandemic. We took along with us hand sanitizers and soap to distribute to one hundred and twenty (120) households. We also gave out print-graphic fliers, with images showing proper handwashing skills, symptoms of the coronavirus, and ways to stop/slow the spread of the virus. 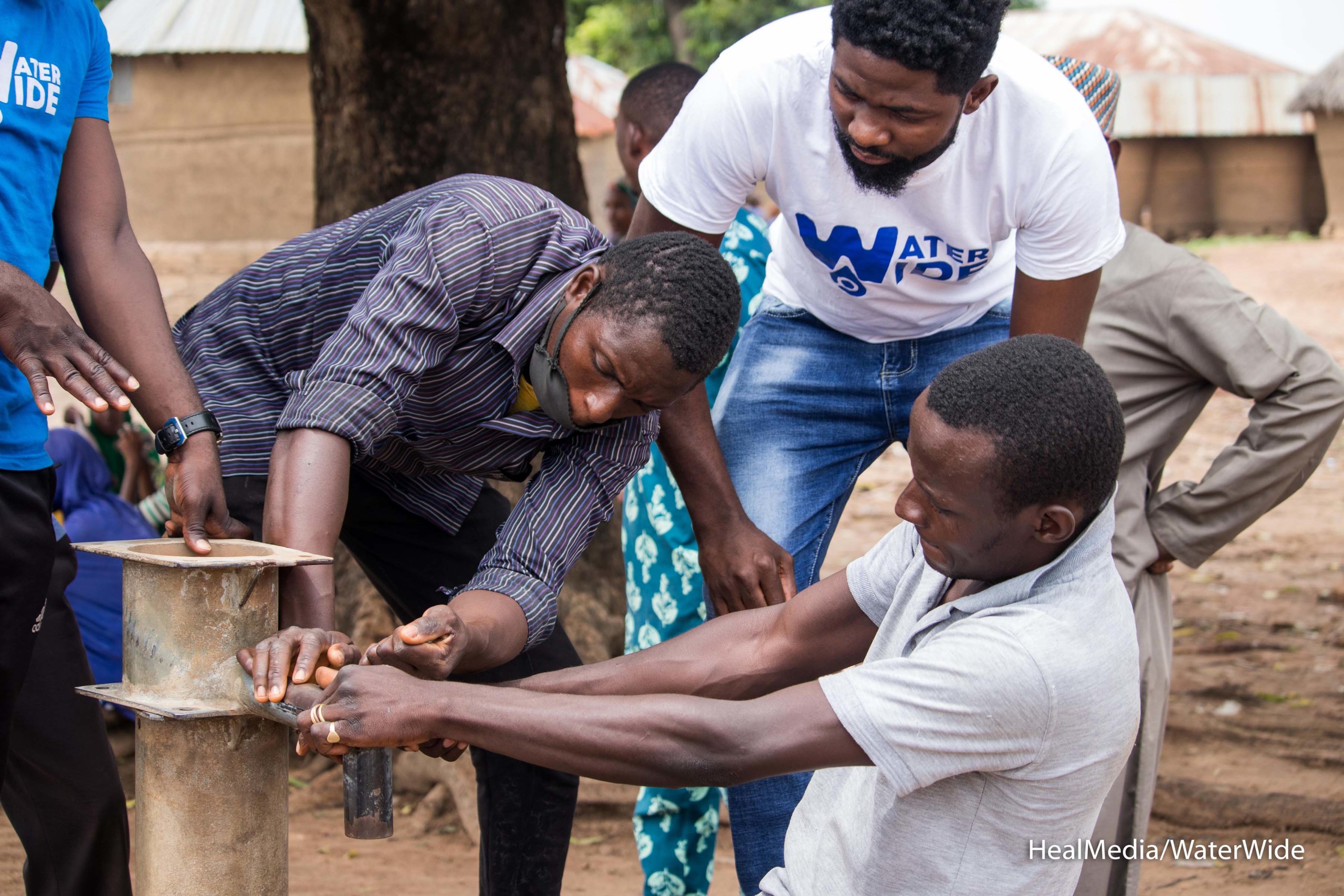 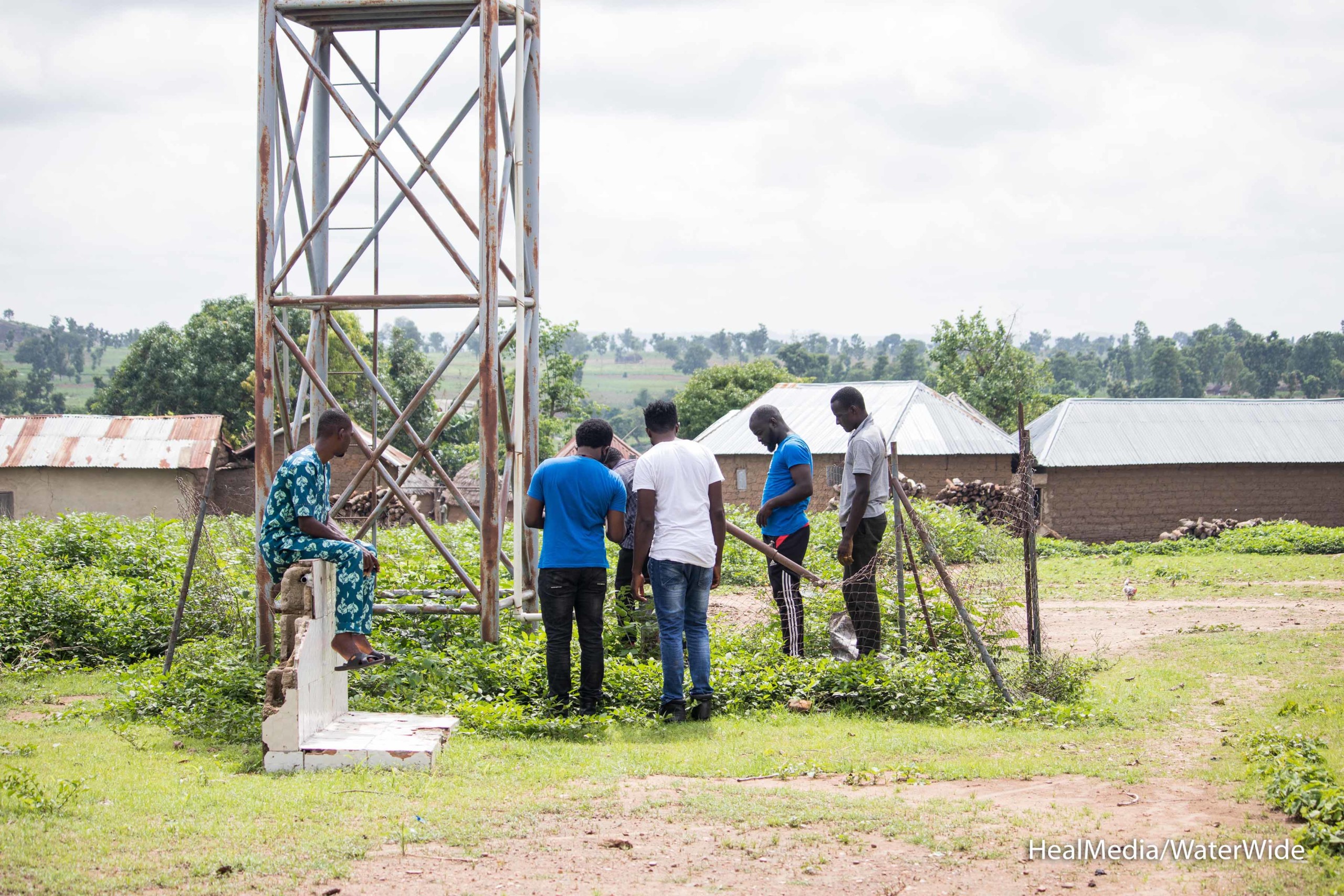 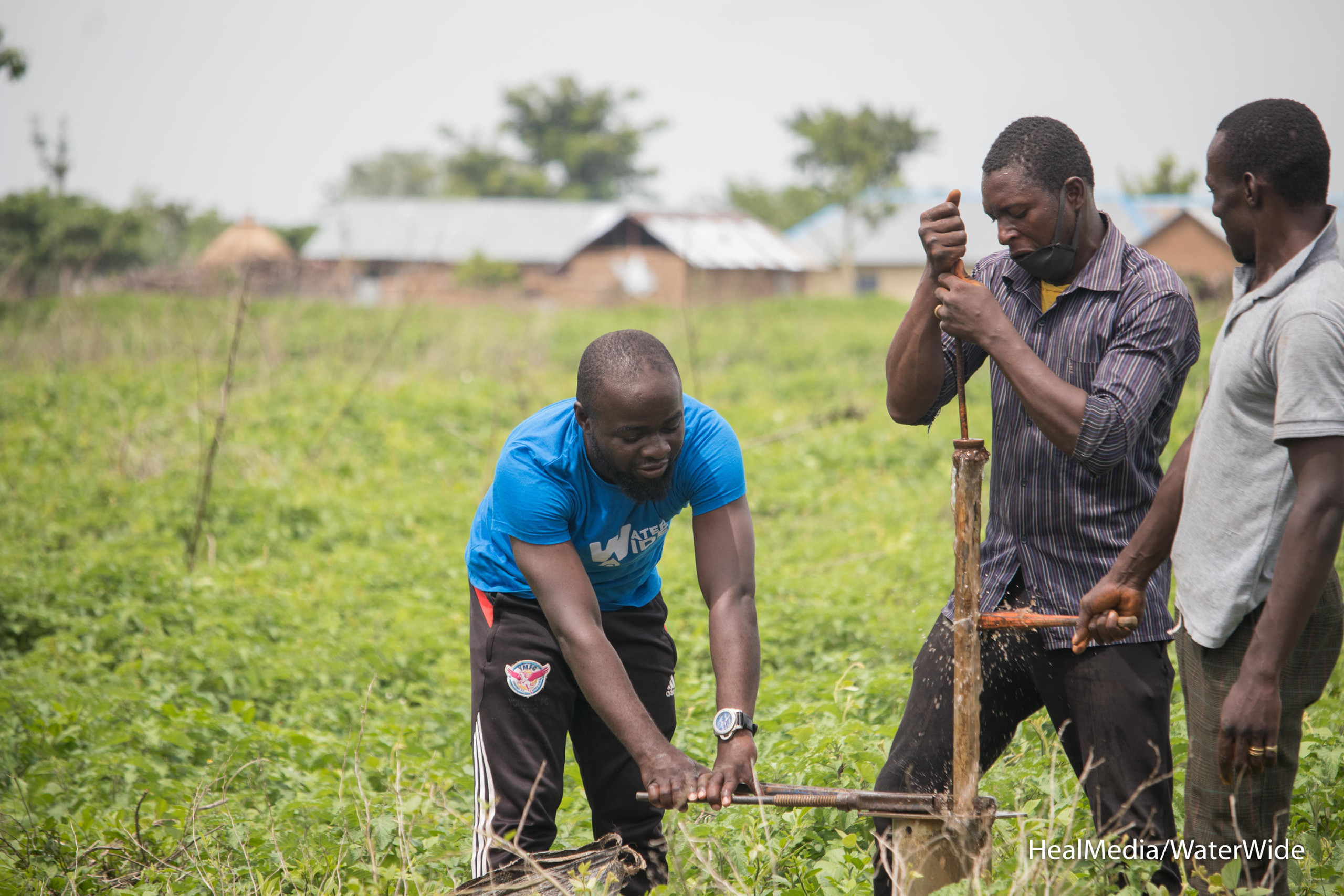 WaterWide with support from OPSWASH and Zenith Water Project also took a team of Borehole engineers to inspect all the non-functional boreholes to see the possibility of rehabilitating them.

We went round to inspect one borehole after the other and we saw that two boreholes was functional but it is owned by 2 churches and it is always on locks. four other boreholes showed the potentials of rehabilitation. And the engineers assured WaterWide that all that was needed was to fix some major components of the borehole and water can be sourced from them.

After the borehole tour, we convened under a tree that gave us shade to hold the sensitization, training and empowerment session for the community. Chase Prosper engaged the community member into a discussion on the realities, dangers, symptoms and preventions of Corona Virus. It was shocking to know that most of the community members either do not know about coronavirus or few who have heard about it do not believe it really exists. These people are almost totally unaware of the lives coronaviruses have claimed and still claiming. They are unaware of the symptoms and so they will not know about ways to prevent been contracted. This session enlightened and made them aware of possibly all about Covid19 and how it can be defeated. We talked about social distancing, handwashing and general hygiene. we also talked about symptoms and what should be done if there is a suspected case. All discussion was translated into their local dialect (Gbagi) by one Suleiman for easy understanding. 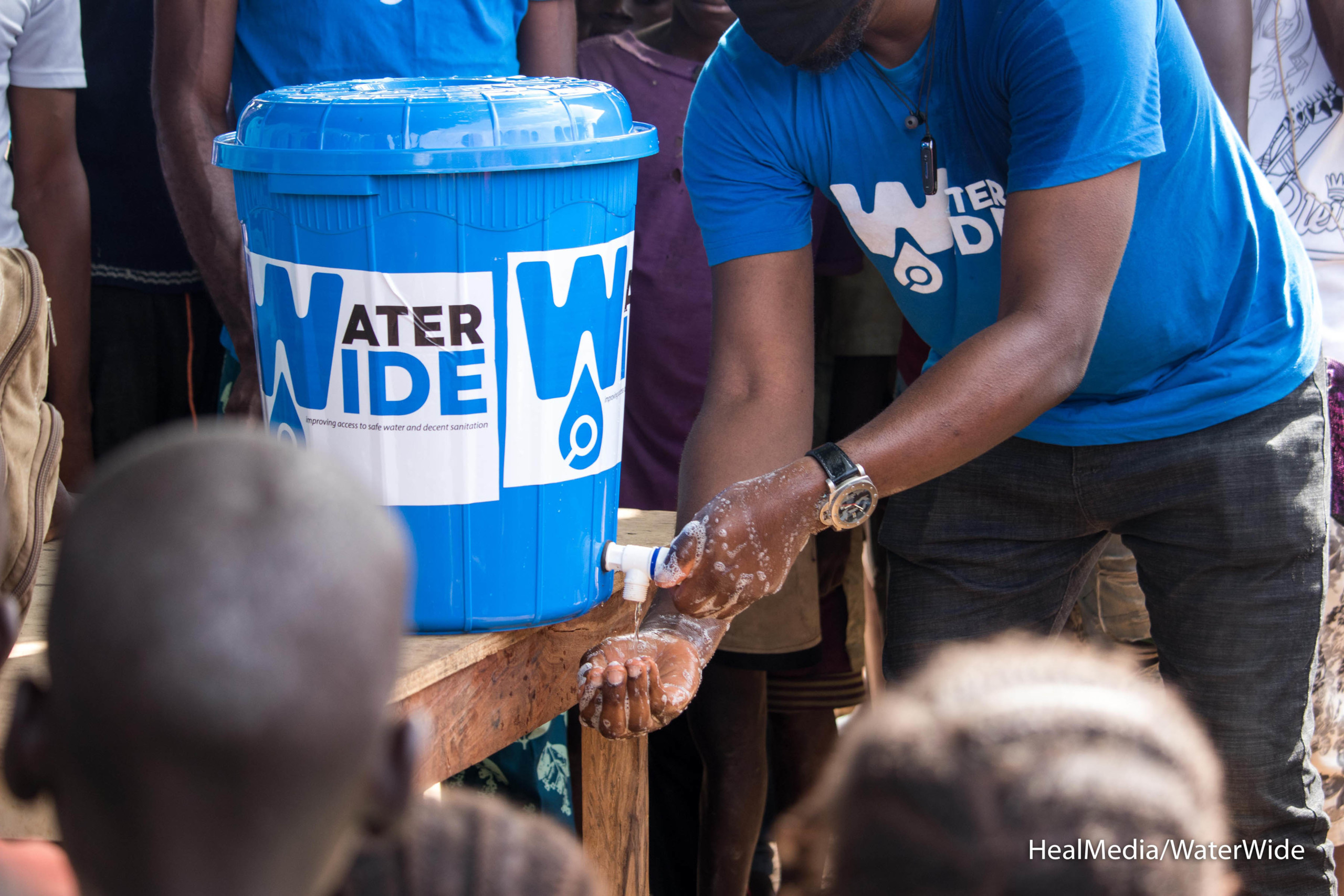 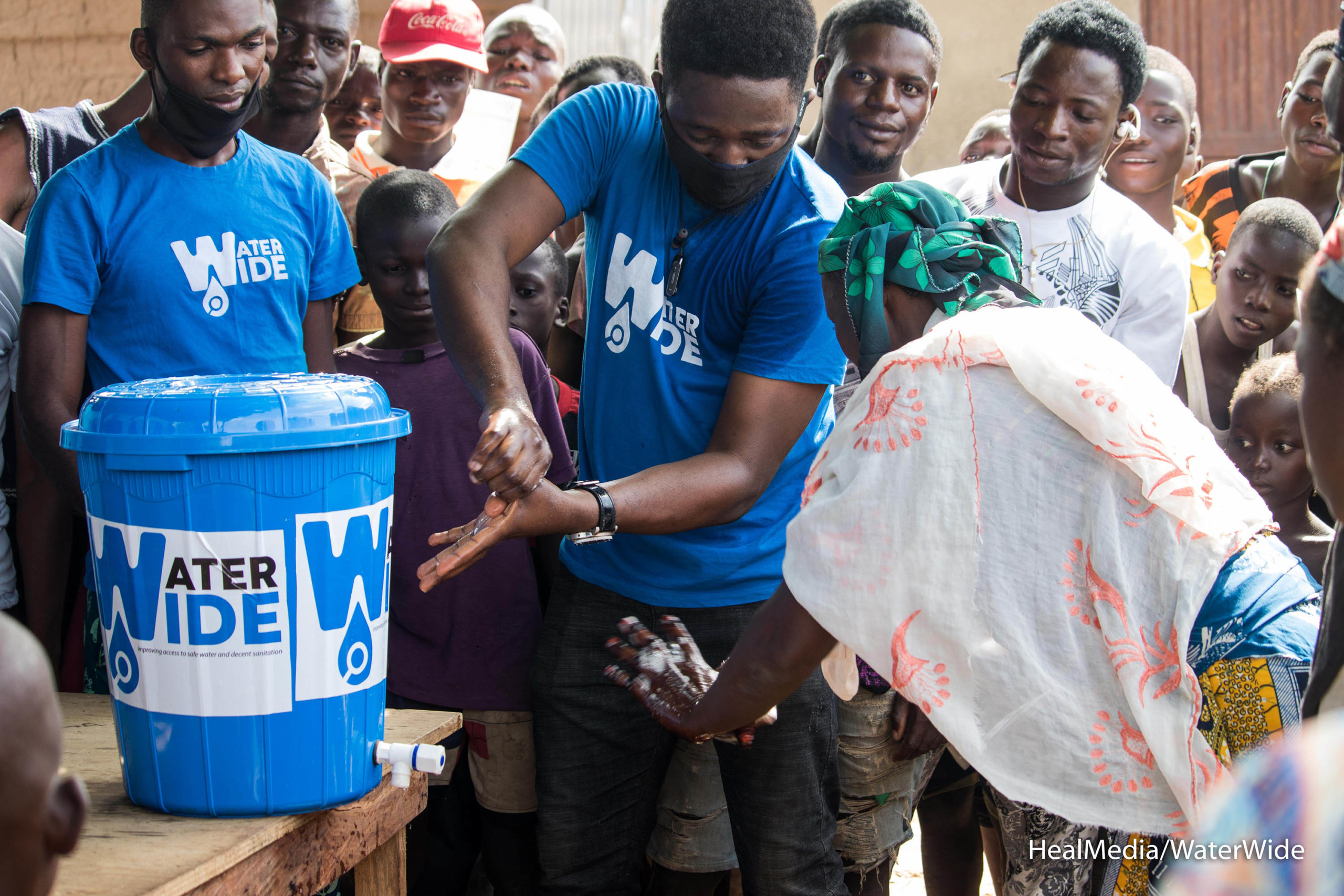 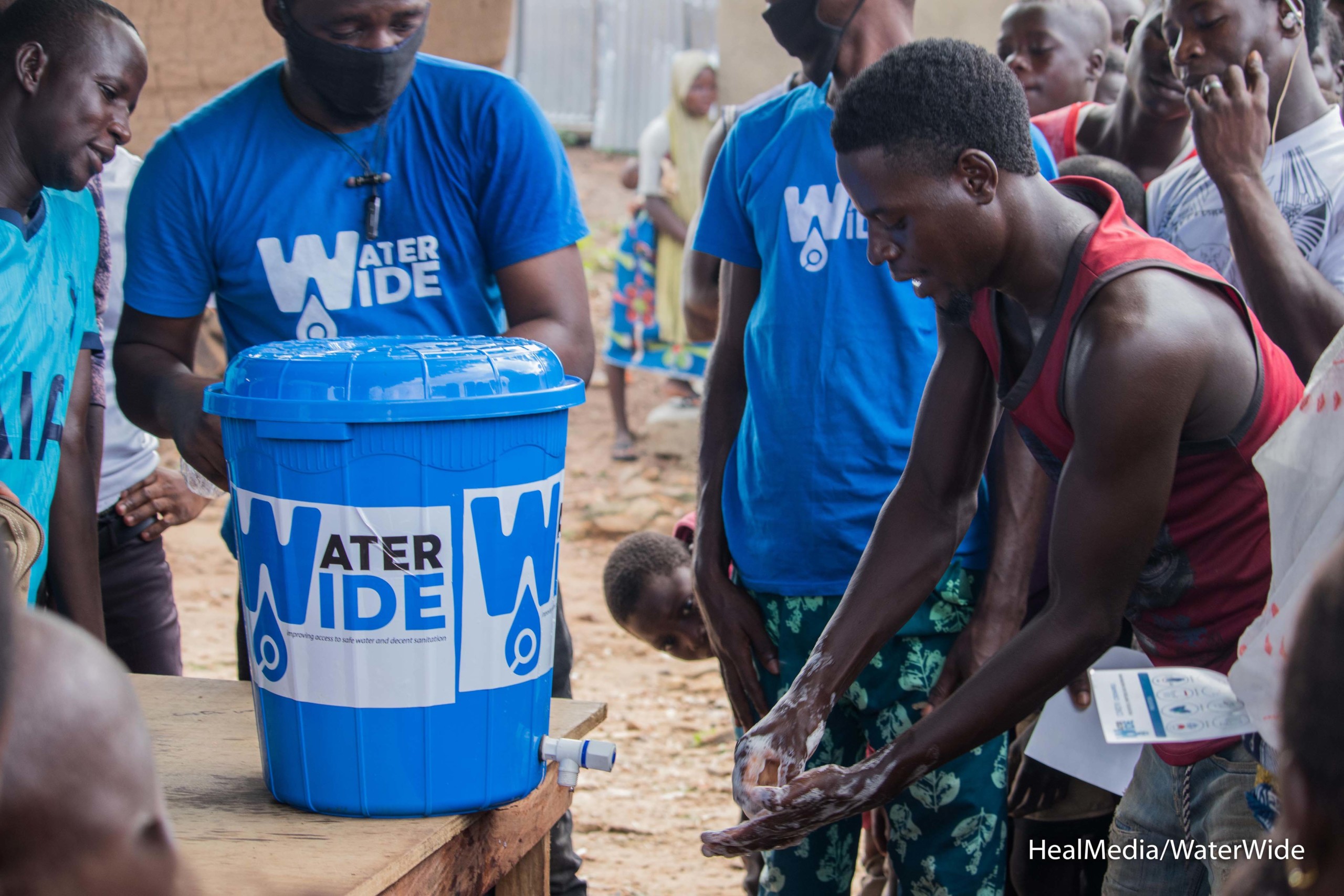 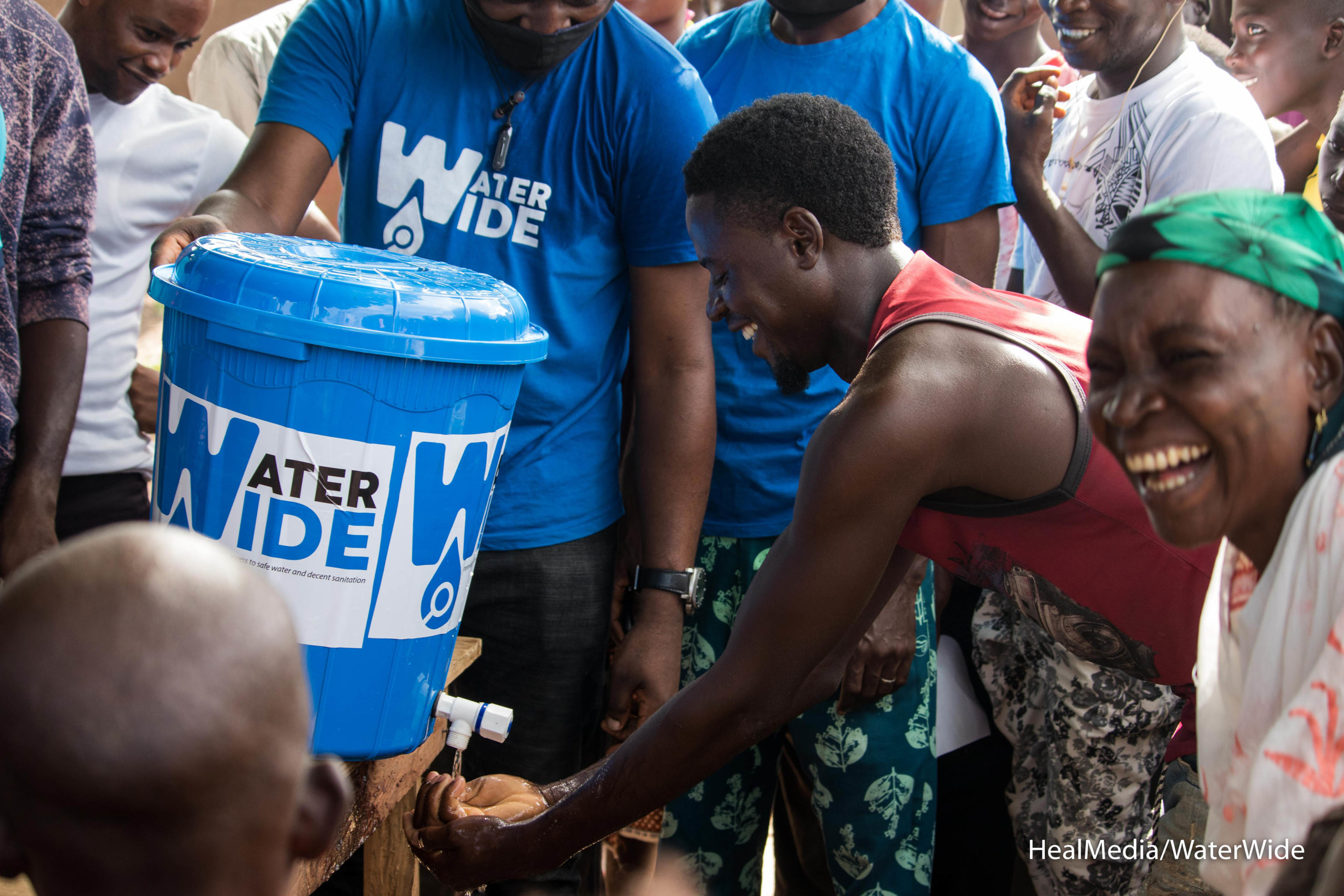 Wilson Atumeyi demonstrated handwashing techniques by washing hands with soap and emphasizing every step of it. He also showed how to thoroughly rinse the hands with running water. To make sure members of the community really understood the basic handwashing techniques, Hauwa Ibrahim a representative of the women leader demonstrated as shown by Wilson by also washing her hands and repeating the techniques. Habib Ismaila also repeated the hand-washing steps. It was an engaging sensitization session as other members who watched their co-members do the handwashing were quick to correct them if they did not do it right. This shows that they were keen to learn and adapt to the handwashing technique. The same techniques of washing hands were applied to the use of sanitizers even though it probably was the first time they came across anything called hand sanitizer according to all of them when asked, They even asked if they should be rinsed their hands after the use of hand sanitizer as it is rinsed after using soap. 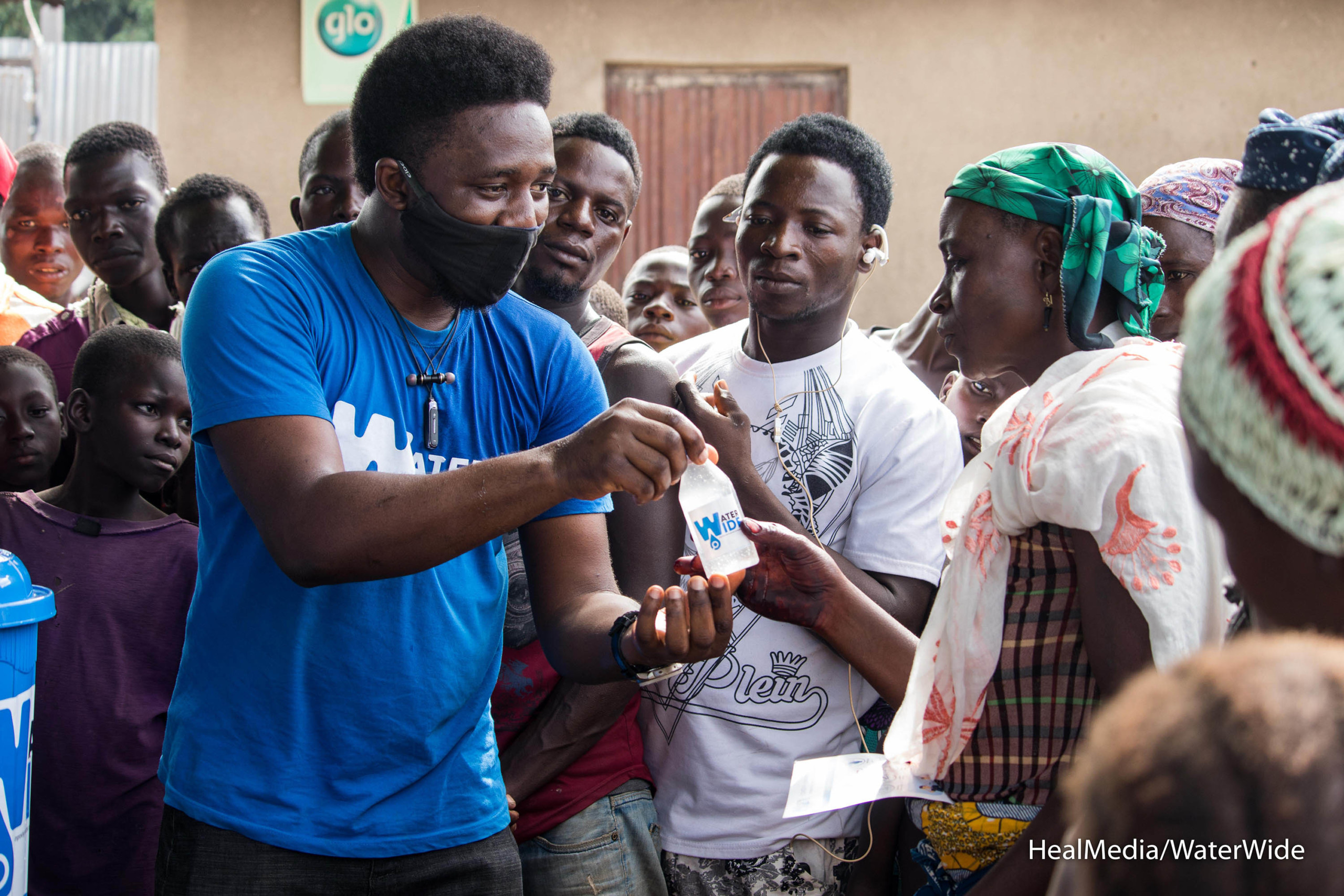 120 hand sanitizers were distributed to one hundred and twenty households. WaterWide assured the community leader and the community members that we will rehabilitate some of the bad boreholes. They would not need to travel on long-distance to fetch water when the nonfunctional boreholes when fixed are located in strategic parts of the community. 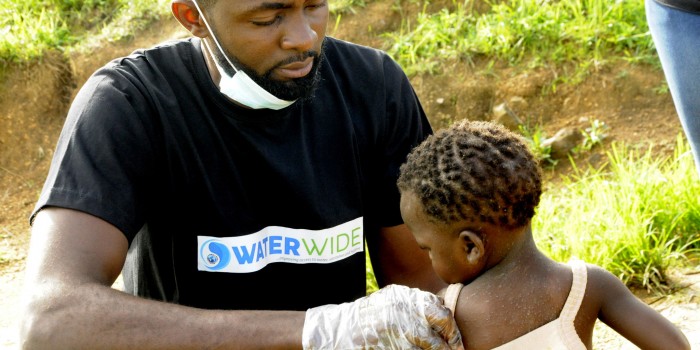 Situated in Miango district of Bassa Local Government Area, and about 15 kilometers away from... 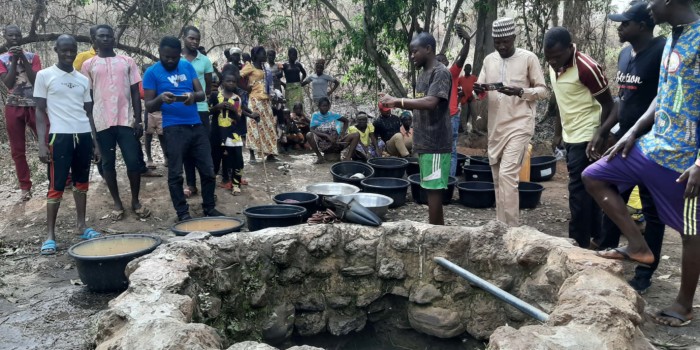 Billions of people around the world especially in rural communities are continuing to suffer from...